lora and Fauna in the World of Avatar 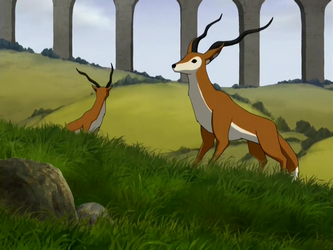 Fauna in the World of Avatar has a notable characteristic in that most animals are chimeras – crossbreeds of two real world animals. The animals from D&D 3.5e are also present however, as well as Dinosaurs in some locations. The flora present in the World of Avatar varies from place to place, depending on climate and conditions.

Assume all Flora and Fauna from D&D 3.5e that are appropriate for the Avatar World (No Magic) exist in the proper geographical habitats in this world. For example, poisons and plants that are appropriate for the avatar world will grow in the proper habitat. The same with animals. Wolves for example will live in the Avatar World most places in the Northern Hemisphere while Polar Bears will exist in the poles and so on. Some unique creatures from 3.5e will also be added throughout the campaign.

This page simply lists the Flora and Fauna unique to the Avatar World. Details on the stats of some of these animals can be viewed at Creatures and Opponents. For information on the animals, such as their appearance, behavior, and more go to the Flora and Fauna page of the Avatar Wikia. Note that the info there is based on the time of the show 2,600 years from now.

Si Wong Desert
The Si Wong Desert holds the driest, hottest climate of the world. The desert’s ecosystem primarily consists of cactus and a few scavenger species such as the Gilacorn, the large predatory insects Buzzard-Wasp, Giant Beetles used for transportation, scorpions and jackalopes.

Great Divide
The Great Divide has various species due to an arid climate. This allows the survival of some creatures, such as the Canyon Crawlers.

Foggy Swamp
Due to the humid air, the Foggy Swamp has a large variety of flora and fauna. Hundreds of living things are densely packed into the swamp, which is home to many creatures, including the Glow Fly, Elbow Leech, Screaming Bird, Catgator, as well as a abnormally large variety of Dinosaurs.

Tropical (Land of Fire)
The Land of Fire has a few tropical rainforests where many animals, such as the Mongoose Dragon, the Boarcupine, and the Badgerfrog, live.

The Land of Earth

The Land of Fire

The Land of Earth

The Land of Fire